First customer to drink from one of the new 20 oz. pints at the Northern Star Hotel, Hamilton, yesterday was Mr. Bob Hall, 87, who has been drinking at that hotel for 62 years.

“That is the last pint I Will drink,” said Mr. Ball as he pushed a half empty glass back over the counter and asked that it be poured into a smaller glass.

“The beer runs down either side of my face.”

Mr. Hall said he began to drink at the Northern Star soon after he arrived in Australia in 1885.

“In those days beer cost three pence a pint. You could get drunk for 1/.

Mr. Hall claimed he started drinking beer at the age of 16 years.

On arrival in Australia he worked underground in Newcastle’s mines.

He was then accustomed to drinking five and six pints a day. He has never suffered any serious illness and still has his daily beer.

The Northern Star about the time Bob Hall drank at the bar in the 1920s.

“I always have the first beer of the day ‘on the house’,” he added.

“That privilege was granted me about three years ago by the licensee because of my long service record with the hotel.”

Many publicans said they had a big demand for the pints, but they don’t expect it to last.

“It was only the novelty that made the demand so big,”‘ one publican said.

“Most of the drinkers ‘broke down’ to schooners or middies after one pint.

“We expect the half pints to be the most popular when they come in.”

Publicans kept the pint glasses well away from the schooners to avoid error.

In one hotel a man who said a pint was too big, asked for a schooner.

He got a pint, but he paid only the schooner price. 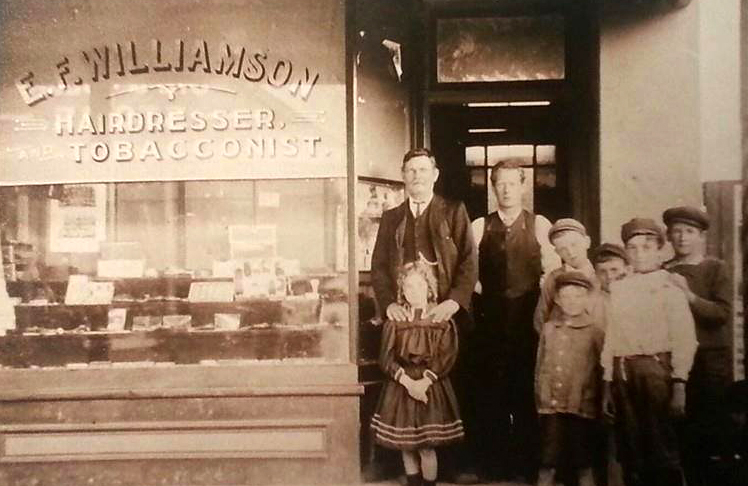 NOTHING remains of Fred Williamson’s hairdressing salon at Bulli today. Where his barber shop sat, Memorial Drive spews a seemingly endless flow of vehicles onto a congested Prince’s Highway, opposite Hospital Road. Eric Francis “Fred” Williamson was operating a hairdresser or barber shop in front of Pritchard’s Music Hall at Woonona as early as 1906. […]