Home › Melbourne Hotels › In praise of the pub

In praise of the pub

The Gordon Hotel, Portland, Victoria was built by the Henty family as the Commercial Inn in 1842. The timber, which was pit sawn, was brought from Tasmania, whilst the doors were of European cedar. The hotel was rebuilt as the Gordon Hotel in 1890.

he charm of the Australian pub — distinguished from the hotel — lies in its simplicity. No criticism can divest it of that.

The pub belongs to the country, the hotel to the city and bigger provincial towns.

The pub flourishes on its friendship, its characters, its familiarity; the hotel on its service to patrons. The pub is personal, in that it grows round the licensee, and depends on his personality for its appeal.

The hotel is impersonal, and the manager remains in the background. The pub is a cubby hole in which you can forget the stress of life. The hotel is a residence, where, if the service is good, you can spend a pleasant holiday. I can think of some pubs I know and feel a warm glow of content.

There is J.’s — one of the oldest in Victoria, small, cheery, and crowded with the ghostly memories of rollicking gold mining days. And J. himself, and his dancing cockatoo. There is M.’s — miles from a town, a centre of friendship in a farming district, frequented by characters who start you dreaming of pioneer days. There is S.’s — near the murmuring waters of a port, where stately sailing vessels call, in another State. Its delicious whiting, its well stocked cellar of imported wines are unforgettable.

By now you have gathered what I mean by the Australian pub. It is not a grog shanty.

It is an institution.

I know a parson with a straggling parish who is a regular visitor to a small pub — not drinking, but sitting quietly by a window in the late afternoon, examining stamps. The old car has carried him that day over miles of roads that are mere bush tracks. He has called on a dozen families. Now with a magnifying glass he pursues his hobby.

Here is a brilliant mining engineer who sips his gin slowly as he chats to you, not about his work, but about philosophy and the meaning of life. In an hour he will stroll across the hills to his sheltered two-roomed home in a valley; he will grill a steak. Then he will sit far into the night reading. But early in the morning he will be at the mine.

I know a man who shows you his antique furniture with pride, and ends with the remark: “I picked up most of it from little pubs in northern Victoria. Each piece has a story. You never know what you’ll find in those pubs.”

Victoria, perhaps more than any other of the Australian States, was born in a pub. Its settlement was planned across the bar of the Cornwall Hotel in Launceston in the days when John Pascoe Fawkner conducted it. Fawkner built Melbourne’s first pub, produced the first newspaper in his Collins Street pub, and established there as well the first reading room and library.

“A shilling for a drink and a free read thrown in,” was the principle of that early reading room. Melbourne’s early pubs were social centres, meeting places for societies and public bodies, election booths, and headquarters of political organisations. Many movements were launched from them, and many exploratory expeditions were planned in them. Victorian Freemasonry had its birth in a pub. Melbourne’s first race meeting was planned in Fawkner’s hotel. The first anglers’ club, and the first “protection” meeting were held in pubs, too.

Another pub was the scene of the meeting which elected Mr A. Cunninghame as delegate to represent the interests of the people of the colony in London. He was a type of Agent-General.

The pub is linked closely with the development of a transport in Victoria. Most of the early coach routes followed the pubs and most of the coaches started their journeys from pubs. Cobb and Co.’s coaches left from the Albion in Bourke Street. In some of the old pubs today you still find the old stables these coach-men used. Quite a well-preserved stable exists in a hotel at Heidelberg. It was used once by coachmen plying between Melbourne and districts beyond Heidelberg. The change from stables in pub yards to garages marks the evolution of transport in Victoria.

But there is tragedy in the history of the pub as it relates to the history of transport. Here and there you come across a pub called The Railway Hotel. But there is not a railway within miles. Why? Merely because some investor visioned the day when a railway line would run through that area, thought of big trade, built the hotel in readiness, then sat down and waited for the railway which perverse surveyors ran in another direction.

Let us end with a story and a remark made to me by the cheeriest pub keeper I know in Australia — a plump, friendly woman well over middle-age and known far and wide as The Duchess. She told me once: “My pub is a home for those who care to make it that. No one will ever drink himself poor in here. I offer them friendship if they want it, a few cheery hours in a long life, if they can’t find it elsewhere. And just a little ale to enliven talk about everything under and above the sun.”

That is why I defend the pub. 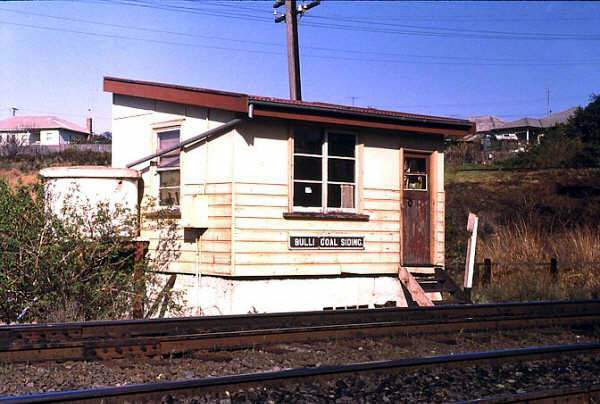 The now demolished Bulli Coal Siding Signal Box in 1987 (Picture: Graeme Skeet). Charles Frederick Smith, a porter at Bulli Railway Station, was on duty at the signal box on the morning of October 26 1938. At about 5.45am, when looking through the signal box window he saw a body lying between the rails about […]